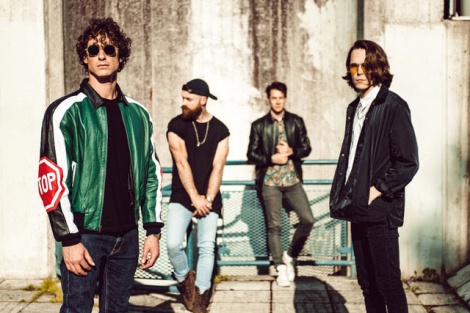 DON BROCO have announced their brand new album »Technology«, due for release in early 2018 through SharpTone Records. To mark the occasion, the band has released the video for “Stay Ignorant,” the latest track from the record, available now as an instant grat.

“Stay Ignorant” is another huge rock anthem from the Bedford four-piece, with danceable riffs and massive sing-along choruses. The video captures moments from the band’s surprise sets at Reading & Leeds Festivals this summer, where The Pit tent was full to bursting with fans who had worked out that the advertised billing of “The Prettyboys” was in fact the mighty Don Broco.

Frontman Rob Damiani explains that the lyrics to the song were inspired by the Lord Byron quote: “Sorrow is knowledge: they who know the most must mourn the deepest o’er the fatal truth, the Tree of Knowledge is not that of Life.”

The new track follows the release of the singles “Technology,” “Pretty,” and “Everybody,” which have delighted fans.

»Technology« is Don Broco’s third album and follows the release of 2015’s Top 10 album »Automatic«, which propelled the band into mainstream consciousness and led them to sell out a headline show at Brixton Academy and play arenas across the UK, Europe and Japan with Bring Me the Horizon, 5 Seconds of Summer, and ONE OK ROCK. The band also toured the United States for the first time in support of State Champs.