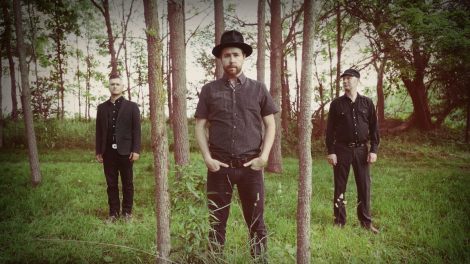 I have always had a thing for cowboy songs. Maybe I have memories of another life etched into my DNA. Memories of life as a desperada, filled with strange encounters, lonely hearts and spirit voices. Either that or I just like songs that can be sung around the campfire, in the kitchen or to a crowd of people and still resonate. Either way, an evening with Elliot BROOD and the Sumner Brothers at the Vancouver’s Commodore Ballroom on September 28th hit the spot.

I remember following the Sumner Brothers years ago as they played the indie circuit of Vancouver. Back then they were haunting, moody, and stirring, and those moods still drive the core sound of the band today. The difference is that today they are a lot louder. They still manage to drop you into a dark pit of despair with soothing intellectual prowess, it’s just that now those baritone vocals are paired with electric guitars, bass and some exceptional drumming.

The Sumner Brothers were well worth the price of admission when I was following them nine or ten years ago and I can confidently say the same is true today. That said, they are also a band that is best experienced in an intimate setting and to fully appreciates everything they are bringing to the table, you need to be paying attention. There is more there than you are likely to digest in one evening.

This was the second time I’d seen Elliot BROOD, the thee piece band out of Hamilton, Ontario. The first was soon after the release of their hit single The Valley Town from the album Mountain Meadows. It’s a song that is likely to get you hooked on this self-described folk-rock/alt-country band, especially if you are a fan of the ukulele, which I definitely am. I’m also a fan of the banjo, which saw a fair amount of stage time in lead singer Mark Sasso’s capable hands.

Elliott Brood has always been a band that adds new twists and turns to traditional themes of country and tunes, so while there were few surprises in Thursday evenings hour and a half long set, there was comfort in the consistency. In fact, the performance itself felt very intimate, which can be a difficult thing to achieve in a place like the Commodore Ballroom. But that night felt like a kitchen party, complete with foot stomping, hand-clapping and lots of sing-a-longs.

One thing I hadn’t noticed before, was the vast array of musical stringed instruments and pedal options Mark Sasso and Casey Laforet have in their respective arsenals. As the trio breezed through a set that featured songs off their new album, Ghost Gardens as well as a sampling of songs from their previous five albums, I began to appreciate the subtle nuances of these options. Another little flavor adding to the uniqueness of Elliot BROOD’s sound.

It’s no wonder that some of their fans are die hards. There was a tall young man up at the front who I’m sure spent the entire show jumping up and down with his arm in the air. Another bearded fan spent some time explaining to me the difference between the versions of the songs they were playing and how they sounded on the records. The trio tried to close out the night with a raucous rendition of their hit The Valley Town but Vancouver fans were having none of it. Luckily it didn’t take long for the three musicians to return to the stage and play a few more songs for their adoring fans.

The encore began with two other hit sing-a-longs, Northern Air and Write it all Down for You, respectively before transitioning into a couple of cover songs, beginning with CCR’s Bad Moon Rising, that the crowd also knew by heart. The encore also featured Mark Sasso encouraging us all to dance and scream, which Casey Laforet took to heart, leaping from his signature seated position and having a few seconds of jam time with drummer Stephen Pitkin. In all, the night was a little short, but truly sweet.