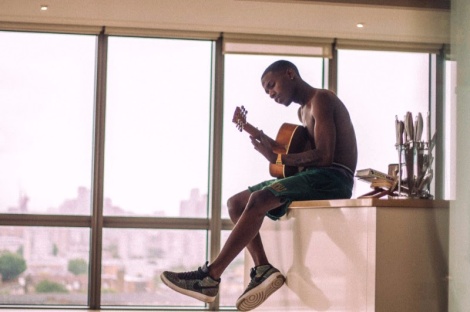 21 year old singer/songwriter Vianni is a multi-talented prodigy. Born and raised in Croydon, South London to Congolese parents, Vianni grew up on a diet of 90s RnB and the Afropop his mum played. Hanging around the Croydon studios where the local rap and RnB artists would record, the teenage Vianni started picking up how to play piano, guitar and drums- although he had little ambition to be a performer himself. “I wasn’t a singer then,” he remembers, “I was just helping out on tracks. I was a dancer really, I didn’t think about being a musician. But then it changed …”

After the death of a close friend, Vianni went to Amsterdam, supposedly to spend a weekend at a festival. He ended up staying in the city for a month, first of all grieving, then heading out to watch shows around the city “I went to a couple of concerts and saw people performing, and realized, shit man- it’s time. I can do this. When I came back I was 17. That was when I really started trying to make music. I’d go on Youtube and watch people playing their pianos and guitars, and I’d just keep going at it and going at it.”

The autodidactic approach paid off. At 19, Vianni, despite being entirely self-taught was accepted onto a degree course at the prestigious British Modern Music Institute. “I tried to get in just to see whether I could get in,” he laughs. “Everyone was saying there were really hard tests to get in – I did the test and passed and they put me in at a high level.”

As he was honing his sound with the classically taught musical theory inside BIMM, outside classes he was spending more time with young producer MB who was working on his own music; a mix of RnB melodies and skittering afrobeats percussion. The two of them ended up creating the distinct Vianni sound almost by accident.

“I was just in the studio with MB, and he was making this beat for another artist. I said, ‘ahh let me try a little 8 bar on that’ – I recorded it, then I went outside to smoke. Everyone else in the studio stayed in to listen to what we’d done – they all came out and said, ‘bro you should be an artist!’ So I tried it. We released that track, Money Making on Soundcloud and it reached 100k plays. I thought, OK! This can work…”

It turns to put his instinct was right – to put it mildly. The next tune Vianni released was Recognise, a mix of smooth soul melodies laid over sharp, snapping rhythms. The song was an instant hit. Within a couple of months of releasing Recognise via the Youtube channel Link Up TV, the track had amassed millions of views. It remains in the top 20 of the all-time most popular tracks on Link Up, and has announced the arrival of a major new talent. Realising he could either learn about music in university or live music in the real world, Vianni dropped out of BIMM and started to concentrate on his career in earnest. Now, with a new single prepared, an EP on the way and a mixtape planned for 2018, he’s ready for the next step on his startling upwards trajectory.

“Every time I realize a tune I don’t want it to sound like me, I want it to sound like I’m getting better every time,” he enthuses. “If I had to describe my sound right now, it’d be RnB with percussion. I started out as a dancer. Now I put all that energy that I put into dancing into my music. There’s content in my songs. I’m writing stories, they’re a journey, there’s no point in making music that’s just a loop. I look to people like John Legend, Usher, Marvin Gaye and Michael Jackson, artists who made songs that really lasted – I want my songs to soundtrack the most important events in your life..!”