With barefoot front man and guitarist Spencer Morphy leading the way, The Velveteins came out swinging July 12 at The Mint, a historic Los Angeles venue established in 1937.

Somewhere between intense, impassioned vocals and instrumentals, Morphy managed to break a guitar string during the band’s first song. But the mishap barely stalled the Edmonton trio.

Morphy, along with percussionist Addison Hiller and bassist Dean Kheroufi, barreled through a roughly 30-minute set of their psychedelic, surf-inspired rock, playing songs from their first full-length album, Slow Wave, released in May.

The Velveteins began their July Tour 2017 in Victoria last week and have been driving down the West Coast since then, making tour stops in Portland and San Francisco prior to their L.A. show. Stops in San Diego, Las Vegas and Seattle are also scheduled through July 16. 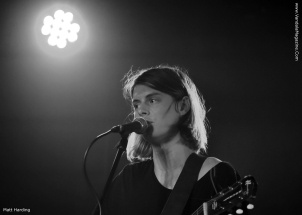 One response to “The Velveteins Come Out Swinging + Photos”