Twenty-six years ago the western Canadian cover music scene, which had an incredible boom in the 80’s, was starting to get stale. The venues demanded that in order to play there the cover bands needed to play from a very standardized playlist. The same songs week in and week out and the bands started to look the same.

At that same time a few bands appeared on the circuit and instigated a change that needed to happen. “People don’t want to hear all the same songs. We played different [songs] and that’s why people would come to see us.” Ryan Dahle, the guitarist for The Age of Electric, one of the bands who were the tipping point that changed the cover scene.

“[Venues] would tell us to play this song list and we would say, “Sure, we can do that.” Then we would play something completely different and it would attract a lot of people. We would get a phone call from the agent who would say “Hey, you are not playing those songs that you have to play, it doesn’t matter that it was sold out, you got to play those songs.”

Todd Kerns, lead vocalist, has had an incredible career, from his solo career to playing and touring the world with Slash. “You had this set of circumstances in order to get into this party. We would just go in and do it our own way. It wasn’t long that we were playing original music and quickly a lot of it. Then it became to the point where people wouldn’t come to hear what the top 40 hits were. They came to hear our songs.”

In that era, it was very rare to hear original music in the cover scene, but Age of Electric defied the trend and pushed their music out. They still played covers, but more obscure songs that made them even more interesting.

“When a guy is sitting with his beer and his girlfriend, he actually wants to hear something challenging. He doesn’t want to just hear another band do Brown Eyed Girl. He really doesn’t want to hear that list of songs.” Ryan states.

One of the major differences of the cover scene to the original scene is the length of the sets. Bands would play 3 to 4 sets from 10pm to 2am six nights a week. “It’s like playing 3 concerts a night. Just the repetition of doing it so many times, the 10,000-hour thing becomes applicable to it. It just becomes so comfortable. The idea of being on stage sometimes is more comfortable than having to be at a dinner party.”

Todd refers back to this time as the band’s Hamburg Years “The best thing we did was having those “Hamburg Years” of just playing all the time like the Beatles went to Hamburg and just played, and played, and played. I’ve played gigs where the monitors don’t work, it’s not even a stage, just a corner over there. You still get up there and you play and you do your thing and you learn so when you get yourself into a position where there is a stage, a sound check and there is all the proper things you just can’t lose.”

“Learning songs taught us a certain craft, we didn’t know it at the time, about songwriting. We learned the basic structure of putting a song together” Todd remembers.

“We learned that a lot of those hits, the greatest songs, the arrangement was not cookie cutter. You realize that a Beatles song is not just Verse, chorus, verse, chorus.”

“I think a lot of musicians skip that part of it and end up in a band writing songs but they don’t really know how you can challenge the regular structures and just follow the stream of the song.” Ryan owns his own studio and is an active producer in the Toronto area producing acts like Hot, Hot, Heat, K-os and is a founding member of the Mounties with Hawksley Workman.

“The internet gives the illusion that no one needs to do the work”. Todd interjects. “We are a blue-collar band, we do what needs to be done. Put your hard hat on.”

In the early 90’s the band created a new opportunity for themselves. Ryan tells the story. “With our artist at the time, we drove from Lethbridge, Alberta to Los Angeles, California. I spent my week there going around and I booked two shows, The Whiskey-A-Go-Go and The Roxy. Talked to the local magazines and got a deal to do full page ads by just talking to them face-to-face. We ended up taking money that we made on the prairies and putting that into traveling there, doing ads, making handbills and doing those two shows”

“It never led to a record deal in America or anything, but it definitely made us feel like we could do anything.” Todd reflects. “It’s weird to think about it, in all the years I’ve been living in the USA now, I often think how different life would be if I decided to relocate to LA [not Vancouver and Toronto]. The good thing we kind of avoided is the idea of becoming one of those nameless bands that were flushed out with the rest of the shit.” This was right at the beginning of the Grunge era when the hard-rocking late 80’s and early 90’s were now ending.

The band stuck to their philosophy of “It’s all about the song”, started their own record label, which they still have and created the music that they wanted to listen to. Combined with their work ethic they have been able to sustain careers in the music industry. Todd plays and tours with Slash along with a solo acoustic career and the Sin City Sinners based out of Las Vegas. Ryan is a producer and the founder of Limblifter and The Mounties. Kurt writes and tours with The New Pornographers and John plays support in bands in the Toronto area.

This year marks the 20th anniversary of the band’s most famous album “Make a Pest a Pet” and for this first time in years a cross-Canada tour. “It was never a good time before for what everybody else was doing. Todd was with Slash for years on the road and couldn’t find a big spot to rehearse and do shows. Kurt was in the New Pornographers on album cycles and tours for many years. And for me, it was kind of the timing rather than any other times it could be. I am working on so many other things, but it’s fun and it’s good to go back and revisit the way we do things. It’s interesting to see the personality of the band combined by those four people how powerful this is. You just don’t realize it. It’s like a sports team that can still skate.”

“It goes back to Vancouver. Todd’s parents are near Vancouver, his kids are there. He always comes back and when he does we make sure that we are aligned to get together and do something. It kind of started organically just like a new band would, we just kept on getting back together.” 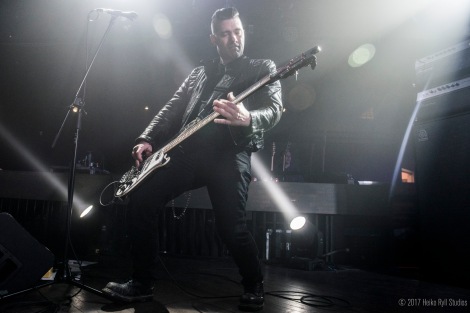 “When we first initially started getting back together it wasn’t like these are going to be Age of Electric songs, or this is going to be an Age of Electric record. It was just two guys getting together as musicians do, going Plikity, Plinkity, Plink, La, la-la, La, La and then all of a sudden you got a couple of ideas that are like pretty f*cking cool. Then they just build into songs.” Todd adds.

“That first Calgary show [May 2016] created an energy of it’s own and created the momentum to finish the songs and put them out. That sort of stuff starts to filter into reality and you start to think that there is no reason why we can’t do this.”

Todd reflects with “[Looking back] from a career sense we could have been playing Brown Eyed Girl and collecting money, like the other bands of the time, until it ran out. Get the right haircut, the right pair of pants, and just show up. Play from 10-10:45 take a break and so on. This wasn’t us right from the get go. We were always the square peg.”

The hard work ethic and staying true to what you believe is what makes careers that last for over 25 years in an industry as crazy as the music industry.

“If this was a [traditional] business we would be the president of the company by now, but that’s not how this [music] business works.”