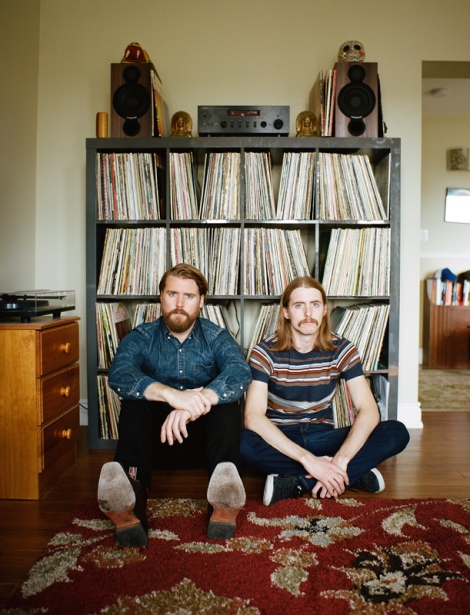 BROS, the groovy side project from platinum-selling Canadian band The Sheepdogs’ Ewan and Shamus Currie, have premiered the video for“Couldn’t Hear A Thing” . Shamus describes “Couldn’t Hear A Thing” as “a dysfunctional love song of sorts.” He explains, “It’s an introvert’s take on trying to connect with his girl amongst all the noise of the dating scene and the outside world. The video is a colourful presentation of the heartache that a shy dude must overcome if he wants to get the girl of his dreams.” As for the feel of the video, director Adrian Vieni wanted to pay homage to teen movies of the ‘80s and ‘90s. “I tried to tell a little love story between an out of sync couple into the tight 3-minute track, choosing a retro roller rink as the backdrop for the story, harkening back to a past era – dated but not explicitly set in any specific period of time.” The video was produced with the financial assistance of MuchFACT, a division of Bell Media Inc.

BROS have announced a string of shows in the Ontario and Quebec area including an appearance at the CBC Music Festival on May 27 at Echo Beach in Toronto. More dates will be announced in the coming days. See below for details. Their debut self-titled album is available now on Dine Alone Records.

Ewan + Shamus have seen a great deal of success with their new project, with the debut album amassing over a million streams along with praise by the likes of American Songwriter, Relix + more. Lead single “Tell Me” has been synced by ESPN US, SportsNet, Hockey Night in Canada, Toronto Blue Jays, and is the new theme music for CBC q. The track has also enjoyed In-arena syncs with the Denver Broncos, Minnesota Timberwolves, New Orleans Pelicans, Minnesota Wild, Colorado Avalanche and Minnesota Twins.