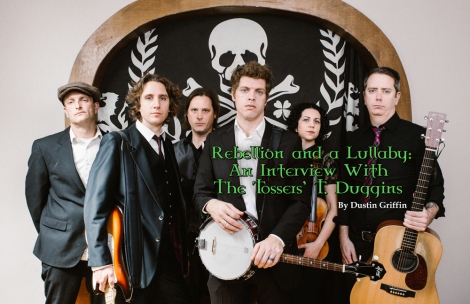 What I like about Smash The Windows is the balance between original and traditional tunes. Is there any rhyme or reason as to which songs you choose to cover from one album to the next?

Tony: Not really. We just enjoyed playing those songs at the time. We did ‘Rocky Road To Dublin’ two records ago and it was just really fun to play. And I always wanted to do that ‘Fermoy Lasses’ song that we did on the last record. And I’ve known for a long time that I wanted to do the ‘Lots of Drops of Brandy’ song, because I was just totally in love with it.

You have a song that you wrote on the new record called ‘A Ghra Mo Chroi’. What does that mean?

Tony: It literally translates as ‘The Love of My Heart’. That song’s a totally true story about my wife and I in Scotland and Ireland.

I feel this way about all of The Tossers’ albums, but there’s some really rich storytelling on this album. Some classic yarns. They feel very authentic. How many of these songs are true stories?

Tony: It’s situational. It depends on the song. For example, ‘The Horses’ is totally real life (laughs). I mean it’s a story I made up about a fella, but I love going to the race track. We used to have my birthday parties at the race track, so that song was really easy to write (laughs). But it’s basically all personal experience. But the song ‘1969’ is about The Troubles in Ireland in Belfast and it’s about the people themselves. The people who marched and fought, those were the real heroes in my books. But ‘Drinking All The Day’ was just easy to write, that’s basically my life story (laughs).

The track listing feels very deliberate. The album plays like a novel of sorts. ‘1969’ for example is bookended by ‘Danny Boy’ and ‘Whiskey’, which feels perfect.

Tony: Yeah, well I’ll tell you, when I write, I don’t try to be poetic or use metaphors. I write words as if I’m talking to you, so you can understand it. I’m not a real poetic guy, I used to try to be, but I was never very good at it. I just like to tell a story plain and simple. So an album does tend to come out like a novel, just like you said. I want there to be an arc. With this record, I wanted it to start off happy. So that first song (‘Erin Go Bragh’) is like a mission statement. That’s basically who we are and what we do. We’re Irish-American kids and this is a celebration of our culture and our heritage. Then everybody wanted ‘Smash The Windows’ second. I didn’t, but I don’t mind. It was just like an easy, kind of like a pop song for me to write, but everyone liked it and wanted it second. But the album slows down in the middle and then goes up again, so yeah that’s all very intentional.

Well I liked that you put ‘The Foggy Dew’ last. If I was pressed, I would probably say that’s my all time favorite Irish ballad.

Tony: Well with that one, The Chieftains version with Sinead O’Connor is the best ever recorded, so we just tried to do that justice. And we did it because last year was the one hundredth anniversary of the Easter Uprising. We were recording it in 2016 and that was our celebration of that time in history and we just tried to make it really good. And we added a verse that isn’t usually put into it.

You have a song on the album called ‘The Town Where I Was Born’. You pay tribute to Chicago with a few songs on every album. What depth of influence does your home town continue to have on your songwriting?

Tony: Oh yeah, lots. That song in particular, but also ‘Erin Go Bragh’ and ‘Resurrection Mary’, which is a song that was almost left off because of the fact that it’s an old Chicago ghost story. It’s about a gal who died on Archer Ave. and her ghost walks up and down the road, and people stop by and pick her up and she tells them to take her to the resurrection cemetery, and when they arrive at the gates she disappears. It’s an old, old ghost story. But we almost didn’t put it on the record because people in, like New York and Boston won’t give a shit about this story, or much less know what it is (laughs). But that is Chicago roots, which runs through everything we do, really.

I really like the song ‘USA’ from the last album. That’s a nice tribute not only to your city but also your country.

Tony: Yeah I just wanted to write something that paid tribute to America. It’s got its ups and downs and some of us are proud of it and some of us aren’t, but it’s ours and we love it. I wouldn’t want to live anywhere else, that’s for sure.

America is having a time right now, where sides are being taken and dissent is taking hold and I truly feel like music is one thing that can bring people back together. Which makes what you do as a profession especially important. Do you feel that way when you sit down to write a song? Does that cross your mind?

Tony: Maybe sometimes. My wife told me the other day that ‘Erin Go Bragh’ is a song about Irish immigrants coming to America and Chicago in particular. And she says that’s a very relevant topic right now. And I said ‘yeah I guess it is’. I didn’t think about that when I wrote it. There probably were some times when I was trying to touch on social issues, but I can’t think of any right now.

It’s more authentic if you don’t try to force it anyway.

Trace a line between punk rock and traditional Irish music. Why do they go so well together?

Tony: Oh yeah, well you know what it is; punk music and rock n’ roll music in general has always been really rebellious. And a lot of Irish music is literally rebellious. I mean talking about forming an uprising and chopping people’s heads off. But the difference between Irish music and punk or metal is that Irish music has a vulnerable side to it. You can have a real lullaby next to a barn stormer. But it’s all born in rebellion. That’s pretty much what it is.

One response to “Interview: Rebellion and a Lullaby: An Interview With The Tossers’ T. Duggins”