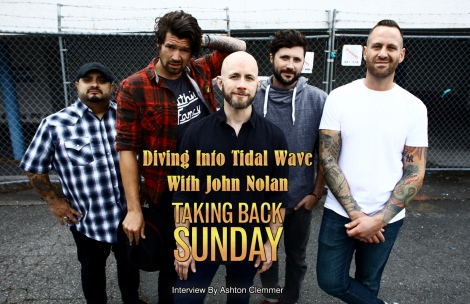 I have been listening to Taking Back Sunday for a very long time. Unsurprisingly, the first song I ever heard from the group was “Cute Without The ‘E’ (Cut from the Team) from their debut album, “Tell All Your Friends” which was released back in 2002. That album would act as a catalyst for my following the group as it did for a major portion of the band’s fan-base.

Current lead guitarist John Nolan, who is an original member of Taking Back Sunday, performed on the iconic album, but before its massive success, Nolan had exited the group in 2003 to form Straylight Run. In 2010 Nolan returned to Taking Back Sunday, and the group has since made three records after his return, the September 16th, 2016 release of Tidal Wave being the third.

When listening to Tidal Wave, long-time fans are going to be taken back by it’s sound and direction. However, it’s something old and new fans are also going to be completely enthralled in. The album displays a massive growth in the groups sound, and capabilities musically, showcasing the individual abilities, and advancements in their art. Nolan spoke to us about some of the big changes the group made during the production of the album and the direction of Tidal Wave.

Before the official release of the album, Tidal Wave, were you getting anxious for the fans to hear it?

John: I was. It’s always a crazy time leading up to a record like this. We finished recording it months ago and that’s usually the case; there being a huge gap between finishing a record and release time. You have all that time to live with the record and get excited about it during the big build up to the release and there’s always a lot of anticipation

What did you think your fan’s initial reaction was going to be?

To you, personally, how does the Tidal Wave album compare to the previous efforts you’ve done with Taking Back Sunday?

John: I am extremely proud of the self-titled album (2011) and ‘Happiness Is’ (2014) and I feel with each of those albums we were learning a lot and breaking some new ground. With Tidal Wave, I feel like we took everything we learned from making those two other albums and took all of it and ran with it; we went to another level.

‘Tidal Wave’ seems very sentimental. and listening to it, I sensed a lot of growth and maturity in the group’s sound since the days of ‘Tell All Your Friends’ (2002). To what extent did past experiences influence this record?

John: All any of us can really draw from is our experiences and whether it’s the lyrics or the melodies, I think all of that comes, very much from our lives and what we’ve personally experienced. It’s hard to say how it all filters into music and how it affects it, but that’s what we do as a band; we put our lives into our music.

What methods did you use while you were making this album, and was anything done differently during production than on previous efforts?

John: One of the big changes is that with the last two albums we had an initial writing period of where we would just get together outside of the studio and write, and do really rough versions of songs for a couple of weeks. Then we wouldn’t start doing demos for those songs until we got together for another session at a studio. With this record, we just jumped right into the studio and started doing demos for everything as we were writing it. We sort of skipped our first step by moving right into the studio. Also, throughout the recording of the record we ended up just taking this stance that the songs are not ever “done” and that anything can be added or taken away from them, all the way up until the record is done being made. That was something we didn’t do as much with the last two [albums]. We might have done it during pre-production it adds that percussive element to a track where it’s buried within the song but you hear that percussiveness of the acoustic coming through.

The percussion is showcased a lot throughout the album, through the acoustic, but also heavily through the drums. How did the drum tracks affect each song during writing?

John: Our drummer, Mark [O’Connell] has always been a huge part of our song writing process. On this album, he took things to another level. We received songs, maybe three or four of them, where he wrote the music for them on Garage Band on his phone. It was electronic, so he was making beats in Garage Band and doing keyboard and some synth stuff. So the starting point of those songs was his rhythms and melodies. I think because of him [O’Connell] being a drummer, even when he does something on a keyboard, he’s thinking rhythmically and it made some of the songs different from what they would have been. We’ve never really written anything starting from that point, with a Garage Band type of track. Mark has been playing for so long now, that his confidence level, and his skill level in the studio is through the roof, and he’s gotten to the point where he can do some really complicated, crazy stuff and pull it off, knowing how to do it the right way

This is your fourth album, with Taking Back Sunday, has working with the group over the years made the songwriting process easier?

John: To some extent, there’s always a little bit of a feeling after you’re done making a record that you wonder if you’re going to be able to do it again, like you’re unsure how it’s going to get started, but then it always ends up happening. There’s a momentum that we have going. Since we put out that self-titled album, we toured constantly and then went right into making Happiness Is (2014). After that we toured constantly again and then jumped right into the current album. I think there’s a momentum that we’ve brought with us that really helps.”

I’d like to talk about the music video for “You Can’t Look Back.” It’s fairly graphic and unpredicted. What inspired the idea for the video to go in that direction?

John: The character has the idea to have a bonfire party in the dessert, thats the setting in the video, and initially that idea; to have this fun party, just kind of hanging out. We liked the idea of that and the visual of that, then Adam [Lazzara] started saying that something dark, and more f*cked up needs to be going on. That was the start of it and we all agreed that if we could combine that fun party atmosphere with something that was a little disturbing and nightmarish. To me, it was presenting this nightmarish scenario where everything is great, and fun and all of a sudden, nobody sees you and you’re literally collapsing and dying without anyone noticing.

What is your biggest aspiration for, Tidal Wave?

John: I think our big thing is that we hope this album can bring some new people into our fan base, and hopefully reach some people who haven’t given the band a chance before. I think that ideally we would like to accomplish that and also have the people who have been following us forever be really incredibly excited about the album as well. I think that’s always the goal, to have everybody who been with you for ten years or whatever, have them super psyched about it and then also get some new listeners into it.”

Taking Back Sunday is currently on tour so grab you tickets early and be sure to grab the latest album, “Tidal Wave”. Whether you’re an old fan or new, don’t pass this one up because it’s something you’ll want to have in your music collection.