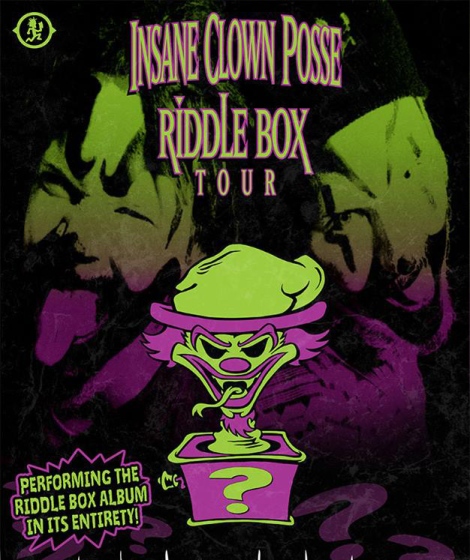 Get ready, Canadian Juggalos! For the first time in more than a decade, the Insane Clown Posse will be bringing their madness and mayhem to the Great White North with a full-scale Canadian tour!

Underground music icons Violent J and Shaggy 2 Dope will be embarking on a 17-city tour, kicking off in Montebello, QC at Amnesia Rockfest and rampaging through the provinces to the final date on Victoria, BC on July 17th.

Insane Clown Posse will be delivering all the wicked chaos that have made their live show one of the most unconventional and entertaining spectacles in music history, as well as performing their Platinum-selling horrorcore rap anthems that have become true underground classics, including “Chicken Huntin’,” “The Neden Game,” “Boogie Woogie Wu” and many, many more!

So get ready to get drenched in Faygo and feel the Juggalo family love because the Insane Clown Posse is coming to Canada! WHOOP WHOOP! The tour is proudly brought to you by Psychopathic Records and International Touring Agency (ITA).

Their trek kicks off at Quebec’s (previously announced) Amnesia Rockfest on June 24, and continues across the country before concluding in Victoria on July 17. This is the first time ICP have brought their mythical Dark Carnival to Canada in over a decade. Check out the full tour itinerary below.

Attention Edmonton juggalos and juggalettes: Detroit hip hop duo INSANE CLOWN POSSE are embarking on a cross-Canadian tour July 2016 beginning in Quebec and ending in Victoria. The horror-core Hip Hop Outfit are going to be making their debut appearance in Edmonton at Union Hall (6240 99 St) on July 9, 2016 (18+, no minors).

Tickets are available NOW  for the Edmonton Show! https://www.ticketfly.com/purchase/event/1159031 also check out more shows via brought to Edmonton by ConcertWorks.Ca