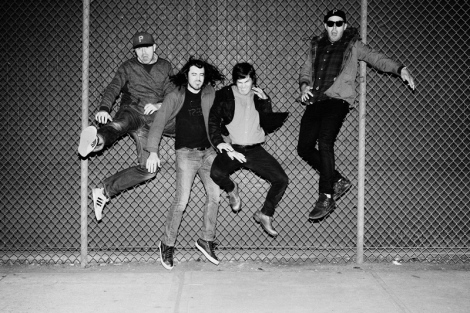 Pittsburgh’s The Gotobeds will release their new album, Blood // Sugar // Secs // Traffic, on CD/LP/DL/CASS worldwide June 10th through Sub Pop. The 11-track album, featuring the brazen lead single “Real Maths/Too Much,” was produced by the band and Matt Schor in their friend My War Matt’s basement, and mastered by Matthew Barnhart at Chicago Mastering.

Stereogum had this to say of “Real Maths/Too Much”: “There are a lot of ideas crammed into the name of lead single “Real Maths:Too Much,” and the music definitely follows suit. Though tied together with a fidgety, hard-hitting punk and post-punk sound reminiscent of Devo and Wire, the song moves through a variety of tempos and feels throughout its duration, an interesting way to parse out all that nervous energy.”

The Gotobeds have scheduled two shows preceding the release ofBlood // Sugar // Secs // Traffic: A hometown show on April 8that Spirit and April 30th in Columbus, OH at Big Room Bar. There will be additional live dates announced soon.