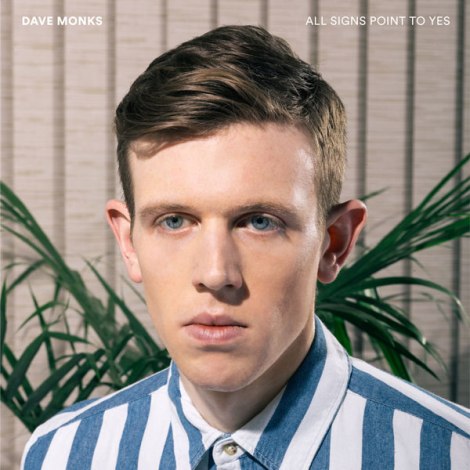 All Signs Point To Yes​ is the first solo release from Tokyo Police Club bandleader Dave Monks. Made up of six songs, including the lead single “Gasoline”, the EP will be released on Tuesday, June 16 via Dine Alone Records and is available for pre-order now through iTunes and the Dine Alone Webstore.
Dave just shared the newest track from the EP called “The Rules” which premiered on Consequence of Sound today. The song is available to listen to and share on Soundcloud.

All Signs Point To Yes was written and completed ​over the latter half of 2013, while Monks was falling in love with a new person and a new place. Inspired by that romantic relationship and a move from Toronto to Brooklyn, Monks sought to hone in on the honesty in his songwriting, stripping away other sounds in order to focus the spotlight on his voice and acoustic guitar. The result is an EP of fully formed, earnest, and insightful songs that serve as both a natural evolution and familiar embrace of Monks’ music.

Removing the other instruments also revealed a creative freedom for Monks, inspiring a simplicity and directness to which all songwriters aspire. “As I was writing these songs I just thought, ‘What if this i​s​ the song, what if it just starts with me and I don’t have to add anything else and I can embrace all the things that come most naturally to me?’ There’s definitely less stuff to hide behind. I think I was learning some of that when we were making Forcefield, ​to be simple and direct, but it’s not always the best when you have three other guys ready to go. You can really strip it back and do that when there’s just one.” It’s worth noting that this project has been fully cheered on by Monks’ Tokyo bandmates, who helped guide him and, as he says, “keep it real.”

Settled in his new place in Bushwick, Monks embraced the collaborative spirit and structure of New York City, adding a new bass player and drummer to the project while sharing songs constantly with his girlfriend and other musician friends. “It’s definitely honest,” he says of his voice on the EP, which he recorded himself in his apartment before handing over to be mixed by Rob Schnapf. “It could be too honest for some people but I’m in a really good spot and wrote a bunch of sweet songs. I appreciate the connection that comes from sharing something that somebody might not have seen, that’s not visible to the naked eye. People do relate to it, and I find that super rewarding; that drives me in a lot of ways. I’m trying to understand what people really want to get out of music.”

Despite all its sincerity and intimacy, A​ll Signs Points To Yes s​till manages to avoid being too wistful or overly serious while still giving us a very real look into the life of its singer. It is​ a small record with a big heart, a snapshot of a man in a new time and new place who is learning to expand his reach, all while stripping away the superfluous and concentrating on connecting through trust, humour, and sincerity.

In support of All Signs Point To Yes, Dave will be playing a handful of shows in North America in the next few weeks. The mini tour, which kicks off on June 15 in Washington, DC, includes Canadian shows in Toronto, Hamilton and Ottawa. See below for a complete list of upcoming dates.