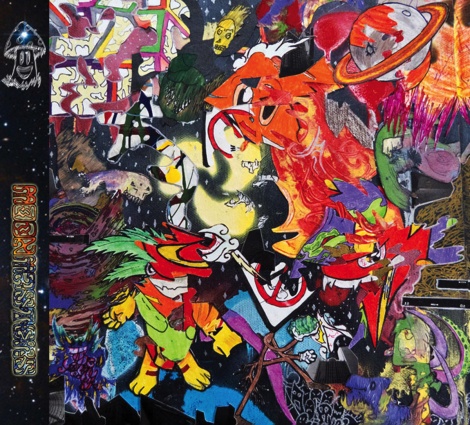 As a whole, punk rock’s golden era of cultural prevalence the late 70s, to the early 90s is a period held such high influential regard, that at any given moment there is always somebody naively attempting to breathe life into the genre’s mainstream relevance. It is only natural for one’s muse to be the inspiration for one’s music. Unfortunately what seems to happen to many talented upstarts is they get tunnel vision for a style and at best become stale replicas. It takes a unique vision to carve a appealing identity and The Johnny Red Eyes have that in spades.

The Toronto based punk self produced their debut ‘Moonmasters’ is a uniquely stylized pendulum in a 12 song monition that swings from the unbridled cores of punk and ska to the music fringes of progressive rock. while maintaining particular boyish charm. The most prime example of all of these elements is the aptly titled Pigs ‘n Panties (a prankster’s ode to beautifying the barnyard) which opens with a skank inducing of riffs, but then transitions into a bridge that borders on psychedelic. Another all inclusive song, (again, aptly titled) ‘I feel about disco, as I do about Herpes’ 7 minute epic, which begins as a Pixies inspired take on an emotionally charged punk chorus that turns into a crescendo of group vocals that leaves few options for the idle. Arguably the biggest experiments are the B52s inspired Sick Of It all which really shines in it’s duality of employing dual vocalists clean/shouting over a groovy running bassline, and the more ska leaning Chocking Victim/ Iron Maiden-esque Galactic Soft Serve, or the instrumental galactic soliloquy Zynphar’s Revenge. For my money, I’d place my bets on the black that is titled All 10 Inches Of Ricardio which is essentially ska song turned into sludgy metal war ensemble.

The only negative take away from Moonmasters is the fact that it was self produced and its mixing does need a professional hand. That aside, this is a strong first entry in The Johnny Red Eyes’ career and those looking for some comic book inspired fun, check out their music video for Vincent Vegas.