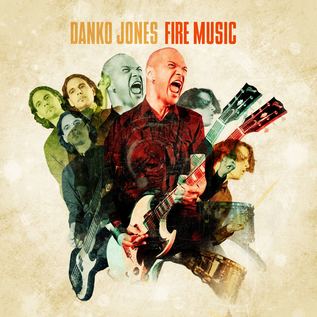 Fire Music is your seventh record and definitely one of your best. It’s also heavier and faster in parts than your other records. Do you sit down and say ‘this record’s going to be this way or that way’ or do you just sit down and what comes out comes out?

Danko Jones: Yeah pretty much whatever comes out comes out. You know we always try to write heavy and fast and really I could pick out two or three songs from every previous record that could’ve been on this record, but that’s just our music. There aren’t really any detours.

Do you often have many leftovers that carry from one record to the next?

Danko Jones: Yeah we usually record three or four extra songs. This time we didn’t, but we did demo a lot of songs. After Fire Music was done, we recorded four extra b-side songs.

I hear some punk influence on this record. Maybe some California 80’s hardcore and thrash. Particularly on the songs Body Bags and Twisting Knife. Was that influencing the shape of the record at all?

Danko Jones: I don’t know if it’s So-Cal punk from the 80’s. It’s more New York and New Jersey punk from the late 70’s and early 80’s like, mainly the Misfits.

Do you find when you sit down to write that whatever you’re listening to at the time leaks in?

Danko Jones: No, with the Misfits, I’ve been listening to them more than half my life, so it’s just kind of in my DNA at this point. I can recall their catalogue at the drop of a hat. But definitely when we wrote Body Bags, that sort of set the tone and we just kept writing songs in that Misfits vein.

You just got back from Europe. You guys tour there a lot. I know you have a big fan base there. Did that happen immediately or did it take a few tour/albums to build that up over there?

Danko Jones: We’ve been touring Europe since 2001, so it’s been 14 years. And the reason we first went was because there was European label that wanted to put out a record with us, we’re still on that label now, and they wanted to put it out when no label in America or Canada would touch us.

I didn’t know that. That’s awesome.

Danko Jones: It’s funny though, when I talk to Canadians about Europe, they think that Europe is just one place, but there’s 50 countries in Europe. So the idea of not touring Canada, which is one country, in favor of touring Europe, which is 50, is pretty much a no brainer. But a lot of Canadians ask why we don’t tour Canada more. Yeah, but we tour a place that’s got 50 other countries in it. So that’s what keeps us going over there.

Why do you think America’s been a harder nut to crack in terms of your fan base than some other countries?

Danko Jones: Well, America’s America. It’s one country, but there’s 50 states. You have to treat every state like a country. So each state acts on its own and you can either try to work them all, or focus on a handful and maybe break a state here and there, but you’ll never break America as a whole.

So when you tour down there, you must find that there will be pockets where you’ll do better than others?

Danko Jones: Yeah for sure. Anywhere we’ve played a lot, we’ll get a better reaction.

You guys have done a lot of headlining tours and have also opened for bigger bands in bigger venues. Which is more enjoyable, playing to a smaller group of Danko fans or winning over an arena or festival of fans primarily there to see someone else play?

Danko Jones: Both are good. Winning a crowd over or playing to people that know the music already. They’re both different sides of the same coin.

As fun as your music is to listen to on record, I would say you guys are first and foremost a live band. I’ve seen you play live half a dozen times and you are definitely one of the more fun live shows out there. I read somewhere that in the beginning you weren’t even interested in a record deal and it’s all about the live show. Is that still the spirit of the band, the live show is number one and records are secondary to that?

Danko Jones: Yeah pretty much. But we’ve also learned a lot since then and learned that you need to release records to tour farther and farther away. And record labels help in that sense. But yeah we still have that same mindset. And in a way the industry’s come around to us. Smaller labels don’t have money for tour support and bands have to kind of fend for themselves. That kind of levels the playing field a bit when it comes to us. We’ll open for any band. I love opening up for hyped bands. See if they can hold their own.

Aside from maintaining a constantly busy schedule with the band, you’re also a fairly prolific writer. Writing for a number of music magazines and websites. I loved your Huffington Post story about meeting Johnny Cash and selling him a Nirvana cd. Are you approached by these publications to write things for them or do you seek them out?

Danko Jones: Initially, when I first started writing for rock mags, I was approached by Rock Hard Magazine in Germany, which is one of the biggest publications in that country. And Germany’s got 90 million people. So it was read by a lot more people than writing for anyone in Canada. So I did that for a year or two, then I asked a couple of publications if they needed writers and was asked again by a few.

So it was a snowball effect.

Danko Jones: Yeah but these days I just write for Close-Up Magazine in Sweden, Rock Zone Magazine in Spain. And whenever I can, I’ll contribute something to The Huffington Post. But I don’t really do too much with Huffington these days just because I’m so busy with everything else.

Does writing articles and doing podcasts scratch a different itch than playing music or does it all come from the same place?

Danko Jones: Both. It’s all from the same place because it’s just me yammering on. But it’s another part of the brain you get to exercise. Also, they mostly let me have carte blanche with what I write. They’re just opinion pieces. So in that sense I just have to answer to myself.

Whereas in the band it’s a group effort behind the scenes. So in this I’m more independent.

What do you think about bands moving away from traditional record labels and starting their own labels, releasing their music independently in an effort to sort of cut out the middle man?

Danko Jones: Well, it’s fine. I mean we release our own records in the states, but you need money to do it. And the thing about people in bands is that they’re all about the headlines. Little thought is gone into making whatever the headline is really happen. So some guy gets a vanity label and it’s a big deal for a while and then you don’t hear any more about it two years later. It’s fun to get the headline, get a little bit of glory and then when that fades, move on to the next headline.

Danko Jones: Yeah, or whatever it is. The reality is if you really want your own record label you have to put money into it. You need to have a way to market and promote your product. Which has nothing to do with selling out or being punk rock or anything. Whether it’s your band or your friends band or anything else, you want that band to do well and be heard by as many people as possible. So bands that have their own labels, unless they’re really committed to putting in the time and effort and money to really making that happen, it’s nothing but a jerk off.

Which keeps even the labels that do pop up with a goal to become the next Epitaph or whatever from realizing their goal. Particularly in an era where it’s getting harder to make money off of the music itself.

Danko Jones: Yeah, it’s a dying industry. Or at least it’s an industry in transition. I don’t fault labels for not putting money into tours or marketing like they once did. It’s just a result of a lack of money in the industry itself.

Every man for himself.

Danko Jones: It often is.

Danko Jones will be on the road to promote their latest album “Fire Music” starting March 9th in Winnipeg, MB and heading across Canada. To purchase “Fire Music” and to for full tour dates and details