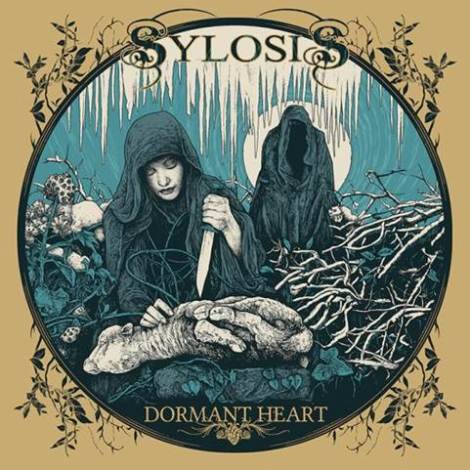 The artwork was created by Bristol based artist BONFIRE

SYLOSIS recently revealed the first track from their forthcoming album Dormant Heart, titled Mercy. Front man Josh has since recorded a tutorial of the track for us and that clip is now up on his YouTube channel where he hosts a variety of other guitar tutorials:

Dormant Heart is set to be released in January 2015 via Nuclear Blast. Watch the official video for ‘Mercy’ here:

Commenting on the track front man Josh states: “Mercy is the first single off the new album. It’s got a pretty dark and heavy vibe to it but it’s one of the most melodic tracks on the album at the same time. It’s got a big slow, doomy outro with an octave pedal on the guitars so that’s going to rumble some guts live. For this video, we wanted to keep it dark and claustrophobic. It’s got some of the artwork from the album and inlay illustrated as well which came together really well.”

The band have also revealed the artwork for Dormant Heart. The artwork was created by Bristol based artist BONFIRE (OPETH, SATYRICON, KATAONIA), who has previously designed some t-shirts for the band. On the theme of the artwork, Josh comments: “The cover relates to sacrifice (the sacrificial lamb is more of a symbol than something to be taken literally) but also the looming, oppressing figure in the background represents corruption and being forced into something against your will.”

Speaking about the album front man Josh states: “It’s the most pissed-off, aggressive and intense album we’ve done, yet it still retains the epic, progressive and melodic side we’re also known for. It’s a very gloomy and atmospheric album. We’ve been through a lot as a band and individuals and we’ve made our darkest album to date.

“The title refers to people going through life on autopilot and being one of the herd, how a lot of people simply accept the way things are just because it’s ‘tradition’ as opposed to taking a good look at the world around you and thinking for yourself. Sometimes there are catalysts that happen and change our perspective or consciousness.”

The album was produced by Middleton with the help of engineer Scott Atkins and was mastered by TesseracT guitarist Acle Kahney.

SYLOSIS began tracking the new album back in March 2014, working away secretly alongside touring commitments. Drum tracks were recorded in May at Monkey Puzzle Studios by original drummer Rob Callard, who parted ways with the band last month due to time restraints. After filling in for some live shows during SYLOSIS’ Spring 2014 tour, BLEED FROM WITHIN’s drummer Ali Richardson is now a permanent member of the band.

Pre-orders for the new album are now live: http://bit.ly/1o2ZvEP