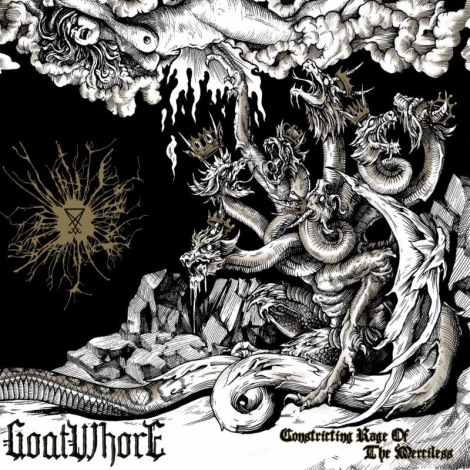 Captured at Mana Recording Studios in St. Petersburg, Florida with audio magus, Erik Rutan at the helm, the deafening serenades of Constricting Rage Of The Merciless serves as the band’s first studio effort to be tracked to two-inch tape. A more challenging approach that demands performance over pro-tooled perfection and leaving little room for error, the ten-track, 37-minute offering marks GOATWHORE‘s most well-executed, sonically devastating manifestation to date, its warm, organic production harnessing the thick, monolithic, recklessly war-ready tone and energy of their live performance in a way previous recordings have not.

“If we went to someone else, it would be a total disaster,” guitarist/vocalist Sammy Duet recently told Decibel Magazine (June 2014 issue) of working with Rutan, who, having recorded the band since 2006’s A Haunting Curse, has become as much a fundamental asset to GOATWHORE‘s apocalyptic sound and vision as the band members themselves. “He understands what we want out of an album instead of coming away with something that shiny, polished, sterile, digitally manipulated and completely fake and false.”

Witness the audio/visual reprimand of the “FBS” lyric video along with the infernal cover creation of Jordan Barlow at metalblade.com/goatwhore where you’ll also find a variety of preorder bundles available.

Constricting Rage Of The Merciless is slated for release in North America on July 8th, 2014 via Metal Blade Records. The record comes in conjunction with the band’s Summer-long live takeover which includes a short run of headlining infiltrations set to commence on July 5th before jumping on this year’s crushing edition of The Summer Slaughter tour alongside Morbid Angel, Dying Fetus, The Faceless and more! Additionally, the band will play a special performance at this year’s Gwar B-Q on August 16th.

More GOATWHORE intel to be revealed in the coming weeks. Until then, suffer.  http://www.facebook.com/thegoat666