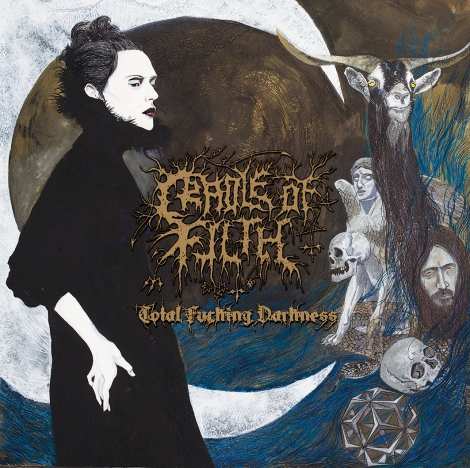 To be perfectly honest, I am a sucker for old school demos because listening to one always makes me feel part of the band’s history. It is also very interesting to dwell into a band’s past to witness its musical evolution and hear the band’s absolute beginnings.  Cradle of Filth’s remastered Total F*cking Darkness is apparently the band’s third demo. Running a little over an hour, this album showcases Cradle of Filth’s early sound that is obviously directed towards the more devoted and curious of fans. Being a demo remastered from tapes, the quality of the sound might be an issue to some but if you’re craving for a raw, necro, KVLT, whatever, kind of feeling, you will find some truly amazing songwriting.

Contrasting enormously with today’s Cradle of Filth this LP does not appear to have any single-worthy tracks akin to the “Death of Love” or “Nymphetamine” but rather showcases a more brutal and raw black metal with some Cradle of Filthesque keyboards and breaks. There are many previously unreleased songs here worth the detour. Dani Filth’s voice sounds less produced and more dry adding to the heaviness of the album. The melodies constructed within are thoroughly dramatic and the overall song structures are more progressive by contrast to present-day Cradle of Filth but it is very interesting to see that even close to twenty years later, a super group like Cradle of Filth still stuck true to their original sound and ambitions.