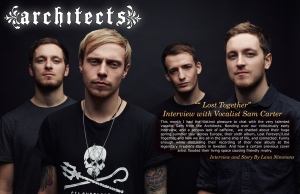 This April we had the band on our cover with am interview with Sam Carter of the Band (READ HERE) and recently UK metal-core outfit Architects (UK) released their latest studio album Lost Forever, Lost Together on New Damage Records in Canada. The band has released a mini-documentary on the making of their new record that captures behind-the-scenes footage from the recording studio and in-depth interviews with each band member. To watch The Making of Lost Forever, Lost Together

Lost Forever, Lost Together is Architect (UK)’S sixth studio album. The record, which has amassed widespread critical acclaim, artfully delivers an emotional charge that’s both devastating and glorious, with lyrics delving into everything from the Fukushima nuclear disaster to Architects (UK)’s guitarist/keyboardist/chief songwriter Tom Searle’s recent bout with skin cancer. Alternative Press praises, “There are few bands who blend juddering metallic violence with aching melancholia with quite as much skill and conviction as Architects (UK) do”, while The Guardian commends the four piece “Architects have toughened up in every department here and made a frequently brutal and complex album that belies metalcore’s on-going stagnation.”
Website | Facebook | Twitter