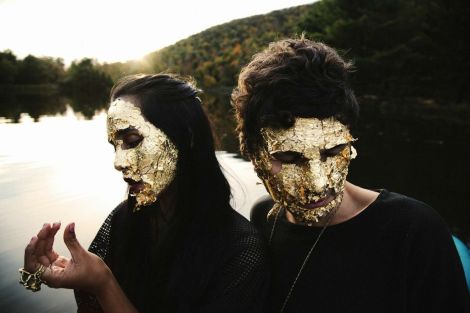 In anticipation of the May 6th release of their sophomore record Breathing Statues on Hi-Scores Recording Library, Young Magic have today released the stunning video for the album’s first single, Fall In . Shot, edited and directed by Angus Borsos (Mac DeMarco, Braids, Nite Jewel, Julia Holter, Doldrums,) the video was filmed entirely in Xilitla, Mexico around the group’s show at Festival NRMAL earlier this spring, and has an otherwordly, adventurous feel throughout. The exploratory visual matches the wandering spirit of the song and the record as a whole.

Director Angus Borsos says of the process of creating this visual odyssey with Melati and Isaac of Young Magic: “The first time I had the pleasure of meeting Melati and Isaac was in the middle of the night; my wooden body had just craned out of a toasted green car that rattled away before I could say goodbye to the driver. The three of us spoke softly of our plans for the next day — our voices fizzy with excitement and our smiles warmly boiling. I went to bed seeing headlights and sharp corners and woke up the next day in the blaring white brightness of my room, a tiny bungalow in Xilitla, Mexico. The first thing I saw when I ripped the door off its hinges that morning was a supernatural landscape that harbored the sounds of colours that make you remember you have an imagination. Everything started falling into place when we noticed the maze at the bottom of the hill… All we could do was shoot what we saw — the light and the landscape, Melati as the symbol of a voice.”

Young Magic also took a roll of film on their journey through Xilitla to capture the behind the scenes moments while filming Fall In, showing more of the beautiful landscape and people of Mexico in a slideshow of photos, viewable here.

Reigning in the melodic chaos of their previous works, the dystopian beats on Young Magic’s second release Breathing Statues were conceived in a new series of experiments. The sonic pairing between Indonesian vocalist Melati Malay and Australian producer Isaac Emmanuel, the two pieced together the album over the past year while on tour, recording in Morocco, France, Czech Republic, Australia, Iceland and their home studio in New York. As a result, Breathing Statues unfolds in labyrinthine fashion, its surreal lyrics and ghostly harmonies emphasizing the record’s otherworldly intimacy, growing darker as the album progresses from the agile Fall In to the lurching chants of Mythnomer. The album operates in extremes with the airiness of Malay’s vocals set in sharp contrast with the claustrophobic doom of Emmanuel’s warped percussion. With Breathing Statues, Young Magic’s series of audio experimentations coalesce into a new holographic landscape, showing a band progressing with ambition towards a sound uniquely their own.

Stream the first single, Fall In, off Breathing Statues