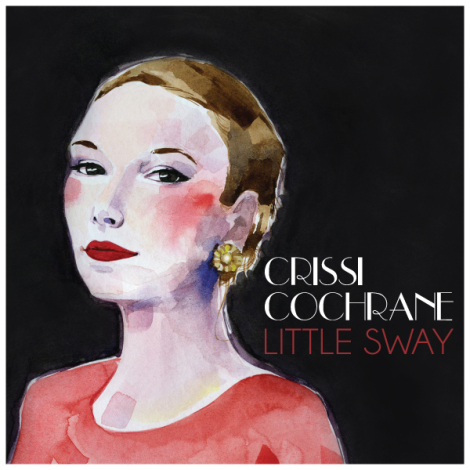 Little Sway, the newest album from Crissi Cochrane, could be named after the movement of early budding flowers in spring’s first breezes. The music is bright and eloquent, splashed with the colors of a botanical garden. It mixes modern American jazz with pop music structures in line with Nora Jones or Corinne Bailey Rae.

“Sleep In The Wild,” the opener has a crisp chorus with horns embellishing Cochrane’s every vocal movement. The album celebrates a carefree existence, never getting too bogged down with heavy emotion. “I don’t listen to the news no more/I just ride my bike to the liquor store,” she sweetly swoons on “Be Around.”

Cochrane is from Windsor, Ontario, but has since found her place in Detroit, Michigan. Little Sway, the 10-song album, is her third full-length. It follows Pretty Alright, from 2011, and Darling, Darling, from 2010. A lovely constant of the album is the surging, billowing horn arrangements. They are controlled, undulating brushstrokes to her musical canvas. Obviously, here, the main highlight is Cochrane’s voice. It remains front and center, breathing both innocence and assuredness, hitting the scale somewhere between Mirah and Victoria Legrand, of Beach House. I imagine the fibers of a dandelion escape her mouth with the pronunciation of every vowel.

“Pretty Words” abandons the drums for a somber, meandering guitar strum. “If I’m not a fool for you / then I’m just a fool,” Cochrane sings, allowing the emotion of the line to inflate on a stream of horns. The only song not penned by Cochrane is “The Man I Love,” formerly by George and Ira Gershwin. Her voice carries the classic over a stable, poking drum machine. She plays the wounded notes of a flute. It is most sublime. Little Sway is perfect listening for when the snow melts and the days begins to stretch.