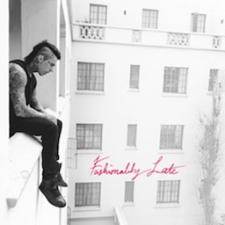 Falling In Reverse will debut their new video for “Bad Girls Club” today at Noon EST.  The clip was directed by Zach Merck who has worked with Falling In Reverse before on their videos for “The Drug In Me Is You,” “I’m Not A Vampire” and “Good Girls, Bad Guys.”

Voted as Alternative Press magazine’s 2012 “Artist of the Year,” one of Revolver’s “100 Greatest Living Rock Stars” and Kerrang’s “50 Greatest Rock Stars In The World,” Radke’s band Falling In Reverse released their latest album Fashionably Late on June 18th on Epitaph Records.  The album debuted in the top twenty on the Billboard Top 200 Albums chart upon its release.  Since forming in 2008, Falling In Reverse have racked up a fanatical fan base, so much so that the band’s legendary videos have been viewed over 30 million times.   The band are currently wrapping up their “An Evening With Falling In Reverse” – Unplugged & Uncensored tour, which has drawn sold out crowds across the country.

Beginning on January 15th 2014, Falling In Reverse along with special guests Escape The Fate will embark on a 24-date ‘Bury The Hatchet’ tour beginning in Los Angeles, CA.  Tickets for all shows are on sale now.  Chelsea Grin & Survive This will serve as support on all dates as well.  www.fallinginreverse.com

“An Evening With Falling In Reverse” Tour Dates

BURY THE HATCHET TOUR – Falling In Reverse & Escape The Fate