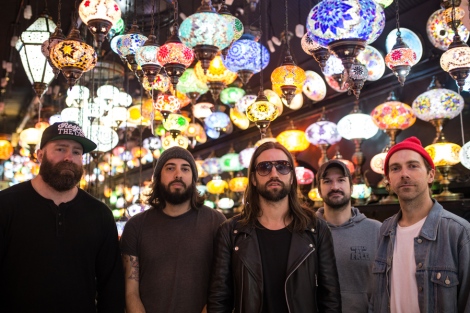 Much of the album is about the night front man Keith Buckley left the tour and raced home to be with his wife who had experienced a life-threatening pregnancy complication. Though both are okay now, the ordeal shaped the lyrical scope of Low Teens. Regarding “C++”, Buckley explains, “if you ever get to a moment in your life where mania and melancholy are coexisting in equal measures, it will feel like the end of the world. This song is about that moment.”

The Buffalo, New York band have been forging their own musical path their 18+ years as a band. Keith Buckley (vocals), Andy Williams (guitar), Jordan Buckley (guitar), Daniel Davison (drums) and Steve Micciche (bass) continued in doing so when they recorded Low Teens with producer/engineer Will Putney (Acacia Strain, Body Count, Exhumed). Low Teens is the band’s most poignant and impassioned album in a career full of sardonic illuminations and pit-inciting fervor. The band was on tour in Toronto in December when Keith received a phone call that his wife was in the hospital with a life-threatening pregnancy complication. It was a harrowing night as Buckley left the tour and raced home to overwhelming uncertainty. Both wife and daughter survived the ordeal, but the moment of crisis had a lasting impact on Buckley and an inevitable role in shaping the lyrical scope of Low Teens.

And as previously reported, Every Time I Die will tour this fall with Beartooth, Fit For a King, and Old Wounds. Tickets are on sale now. www.everytimeidie.net/

EVERY TIME I DIE TOUR DATES: