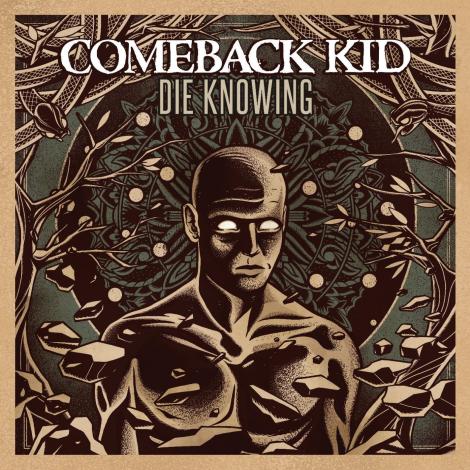 I don’t know why, but the soulless mascot on the cover of ‘Die Knowing’ initially reminds me of Mr. Freeze from Batman: The Animated Series. I know they only have a passing resemblance, but there’s a familiarity there that I can’t shake. Maybe they’re cousins or something.

The art that adorns Comeback Kid’s fourth offering is appropriately claustrophobic. I’ve been sitting here studying this thing for the last five minutes and I still don’t know the extent of what’s happening in it. Initially it feels a little busy and if busy art isn’t your thing, it can be somewhat off-putting. But look closer and you’ll be rewarded with an intricate web of design and ideas. Each individual expression layered and carefully placed to serve the whole.

The mastermind behind this impressive and unsettling graphic is the eminently talented Southern California artist Dave Quiggle. Quiggle is a well known manufacturer of graphic art and screen print in the music industry and has done work for no less bonafide legends than Joey Ramone and Misfits.

The lyrical content of Die Knowing flits between anger, questions of self worth and even redemption. Lyrics that fit the anvil like presence of the music. But one of the great things about Comeback Kid is that their hardcore exterior and occasional tough-guy first impression is often a surface primer for what is in actuality an incredibly diverse and multi-faceted, dense musical landscape. Multiple guitars will charge ahead like angry, steam-powered locomotives on separate tracks with separate destinations, all the while running parallel to each other in perfect unison. Thundering drums and rollicking bass line provide cues and backbones made of solid steel. And impassioned vocals shredding through the ruckus and breaking through the wall, that hurt your throat just to listen to, drive the point the music’s making home without a whisper of regret or hesitation. This record can be overwhelming in the best sense and Quiggle has crafted an image to fit the bill.

It’s exciting when two artists, hugely talented in their own fields, come together for a collaboration that jumps the separation of labels and create a unified work that makes as much sense as interlocking fingers.

On another level, the collage of images that grace this cover could also represent nature. With the otherworldly figure a humanistic personification of it, better enabling it to commingle with the human race, perhaps in a last ditch effort to bid an SOS for its dying soul.

Certainly the sound on Die Knowing, as deliberate its intricacies in the layers beneath may be, is a return to roots exploration of some of the band’s heaviest, and earliest, material. Of course, there’s something to be said of reading too deeply into things and looking past philosophical contemplations. At the end of the day the cover of Die Knowing could have nothing to do with the record’s title and exist simply as a cool looking and impressive piece of artwork by a talented artist. One that perfectly complements the content it represents. That’s cool too.