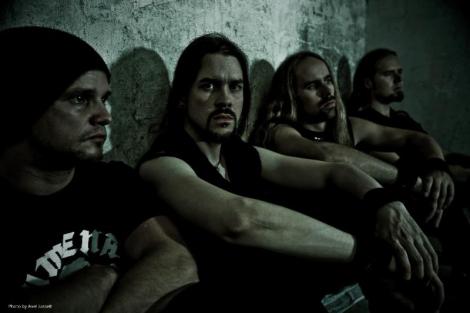 This past December, Finnish melodic death metallers INSOMNIUM spent their holiday season in the studio recording their 6th full-length album. In order to achieve the best production in the band’s history, they decided to record drums at SF Sound (with Kimmo Perkkiö), located in INSOMNIUM’s former hometown (Joensuu), while recording the remaining instruments at studio Korkeakoski (Kotka) with Teemu Aalto. André Alvinzi (Fascination Street Studios) will now mix the album so that it will see a spring 2014 release.

INSOMNIUM’s Ville Friman (guitars/vocals) comments: “Again, the process could be described as a battle against time and ever-narrowing deadlines. We worked long days and we worked hard. But in the end, it was all worth it: new songs sound just amazing. I think the new material is a bit more atmospheric than before. We explored different directions, and for example, experimented with rhythms a bit more; we even have blast beats on this album. And of course, Markus Vanhala brought in his influence in terms of song writing and guitar playing which is something new. However, I think we did not push it too far but stayed loyal to our own sound. Our intention was never really to change but merely update and revise our sound a bit. And I think we did pretty good job with it.”

For a preview of INSOMNIUM’s forthcoming album, the previously-released single, “Ephemeral”, can be heard here:

To purchase “Ephemeral” (with three acoustic songs as a bonus), please visit iTunes.